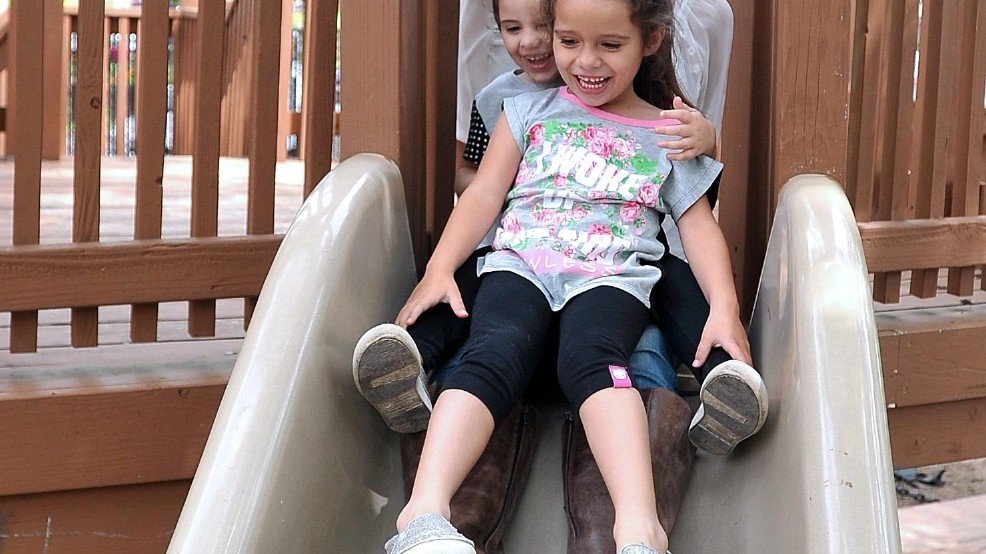 Photo Caption: Rebecca Schubbe, a mentor with the Family Nurturing Center, plays with her children Maretta, 3, and Bella, 4, at the center on Wednesday. Mail Tribune / Jamie Lusch

Written by Tammy Asnicar for the Mail Tribune.

At age 6, Daylene Padilla witnessed her half-sister’s father commit suicide in their home.

It was just the first tragedy, she says, in a childhood colored by tragedies.

At age 9, she met her biological father and brother for the first time. At age 10, she was their drinking buddy. Later, she saw her father shot and killed in front of the neighborhood liquor store.

Introduced to methamphetamines at age 13 by her mother’s boyfriend, she was using and selling by age 15. A habitual runaway, she survived life on the streets by selling drugs and stealing cars.

She celebrated her 19th birthday in jail.

At age 20, although she had given birth to a daughter, she continued her habit of “shooting meth,” “slamming dope” and stealing cars, she says. After a two-year stint in prison and absconding parole, she lost her parental rights and eventually her daughter was adopted.

Now, the mother of a second daughter and clean and sober for 2½ years, she has a second chance at parenting her 5-year-old after nearly losing custody of her, too. Padilla is living in an apartment, not a hotel. She recently bought her first car, she says, emphasizing “bought, not stolen.” And, she has her first real job.

Padilla’s past is only the prologue to the rest of her story.

She, along with three other women with similar stories, is now a full-time employee of the Medford Family Nurturing Center as a peer parent mentor. Her clients are parents whose children are in foster care because of substance abuse, criminal behavior, domestic violence or the inability to provide a safe and healthy home for their children.